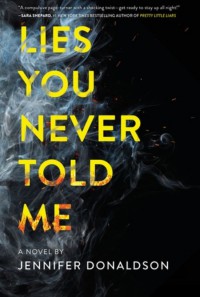 This book is one clever, clever page-turner. From the first page, I found myself drawn to the story and its characters, yearning to understand how their lives would intertwine and, if not, what connection they shared that would make them co-narrators of this story. My desire to find out what would happen next was so strong that it felt almost physically impossible to put this book down. I can't put my finger on what it was exactly, but something about the writing really drew me in. Both narrator's voices were very strong and distinctive. Not only that, they felt like the realistic thoughts and reactions of the teenagers they belonged to and their circumstances. Its been far too often that the books I've read have featured teenage protagonist with voices that were either too mature or too immature. I think Lies You Never Told Me hit the perfect middle-ground, in which the narrators' voices were perfectly reflective of their age and mindset, which I greatly appreciated.

That being said, I also have to say that there were several instances in the story where I was looking for more than what I was given. If I'm honest, Sasha's story-line felt a bit off at times. The character is vital to story, but a huge part of her arc seemed almost unnecessary in a larger context, with little motivation seemingly being given for her actions. Certain aspects of the story likewise didn't seem to meet full closure by the story's end, which was a bit disappointing.

Overall, this book is totally worth the read if only for that one plot twist. I can't say it or even hint at it since its so good, but I gasped out loud once I put two and two together. The author did a truly fantastic job.